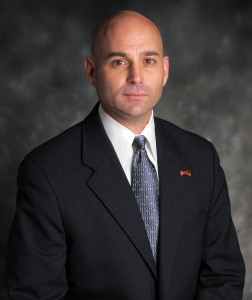 highly respected policy experts in the prevention of domestic terrorism. Recognized as a leader of police and public safety initiatives, Chris has experience advising the highest levels of government and corporate executives. Governors, Presidential candidates, and political think tanks often call upon Chris’ experience, which includes time spent testifying to House and Senate committees. Under Oath, Chris gave testimony regarding the need for specific counterterrorism initiatives at the behest of the Center for Strategic and International Studies (CSIS).

With extensive experience in small to medium-sized consulting businesses, Chris organized and currently leads a work-place violence coalition comprised of 15 companies, known as the Safe2Safest, Strategic Alliance. Each of the 15 participating companies is recognized as the nation’s leading expert within their industry for a specific security discipline.

Prior to his current endeavors, Chris spent 12 years as a Marine and Marine Corps Senior Drill Instructor. During his service, he was awarded several commendations and received record-setting accolades, including Drill Instructor of the Quarter, and the number one spot on the Meritorious Promotion list to a “Staff Rank” – reserved for the top one percent of Special Duty Marines.

Chris served as a Police Corporal, Narcotics Detective, SWAT Operator, and Element Leader, and Police Officer for the city of McKinney, Texas between 2002-2012, and indefinitely retains his Master Peace Officer license in the State of Texas. He was selected early on in his career by his peers and supervisors to serve in Board-level leadership positions such as Secretary, Vice President, and President of the McKinney Police Association. While serving on the Board, Chris was instrumental in arbitrating raises and reducing budget constraints over a five-year period.

Following his successful tenure of Board leadership, Chris was selected to attend the coveted Internal Affairs and Ethics Investigator Course at the International School of Police Management. In 2010, Chris began his postgraduate work and earned a Master of Science Degree in Administration of Justice and Security. He graduated with a 4.0 GPA and was later inducted into the National Honors Society. Chris also holds AA and BS degrees from accredited universities.

Notably, one of Chris’ most recent significant achievements was being selected to advise the Mackenzie Institute in Canada of the phenomena of active shooters in America and abroad. The Mackenzie Institute is a globally recognized Canadian-based public policy institute for research and comment on issues impacting political and social stability, specifically terrorism, organized violence, and security.

Chris Grollnek is now internationally recognized as one of the leading experts and authorities on the phenomenon of “active shooter” events and Domestic Terrorism Prevention. He has appeared on numerous national television networks, including Fox, CNN, OANN, ABC, CBS, and NBC along with numerous syndicated radio broadcast programs.