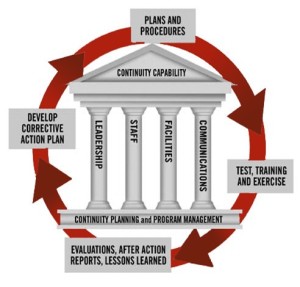 The components of the Continuity of Operations (COOP). Two components described as their importance as they relate to Emergency Operations Plans (EOP) and COOP.

The components of the Continuity of Operations are vital to understanding BEFORE responding to an incident, during the incident, and after the incident is completed or passed… The COOP is set up at separate levels between states, counties, and cities returning all the way back to the national level ensuring that essential functions can continue in the event of a critical incident or natural disaster (man made or not). This must encompass a broad approach for emergencies and the like.

Key components of the plan include:

Essential Functions: Establishing which functions must exist is important to have a starting point not just for the planning stage but for the execution during an event.
Orders of Succession: Chain of Command during an event and who has authority for decisions if the natural person to be in charge is not…
Delegation of Authority: This is important to ensure who has the authority to be in charge of what function and when that authority ceases to exist.
Continuity Facilities: Alternate locations to operate out of for command and control assuming the primary headquarters or sub stations of control are unavailable – otherwise, a plan “B” location.
Continuity Communications: Same as location but a back up communications system secure enough to operate in MORE than adverse circumstances.
Vital Records Management: Securing location during an event and being able to access information if needed for a duration of time
Human Capital: The responders and support personnel for the locations under siege. Families of these people need to be considered as well although not typically thought of from a governments perspective… Who evacuates the families of the people doing the evacuating and assisting?
Tests, Training, and Exercises: Nothing more than training for every possible event to ensure readiness.
Development of Control and Detection: Mainly having the ability and practice to transfer authority to alternate agencies and back and forth should the situation go beyond a reasonable amount of time…
Reconstruction: Rebuilding what was affected.

The two most important would be:

1. Establishing the essential functions during an emergency – an example on a smaller scale would be during the first two to three hours of a homicide investigation, no one in the city goes out to self initiate activity like traffic stops and suspicious persons outside of the investigation zone. That way the department is available to respond and assist the homicide team should they need something or teams of support. In other words, don’t get tied up on petty things when major things are happening and understanding the difference.

2. Test, Training, and Exercising – the day of an event would NOT be the best time to test a plan to see if works or try and train people for something they were not remotely prepared for. Test and training usually uncovers the “bugs” within the plans.