A Marine, as seen by…

Himself:
A handsome, buff, highly trained professional killer and female idol who carries a finely honed K-Bar, wears a crisp 8-point cammie cover (hat to all you civilians) and is always on time due to the absolute reliability of his Seiko digital watch.

His Wife:
A stinking, gross, foul mouthed lovable bum who arrives back at home every few months with a seabag full of dirty utilities, a huge Seiko watch, an oversized knife, a filthy hat and hornier then hell.

His Commanding Officer:
A fine specimen of a drunken, brawling, HMMWV-stealing, woman-corrupting bullsh—er with an incredibly accurate Seiko watch, a finely honed razor sharp K-Bar and a salty cammie cover.

What others have said:

Congress:
Marines are fanatics who are out of touch with society, overpaid, overrated tax burdens who are indispensable since they volunteer to go anywhere at any time and kill whoever they’re told to kill, as long as they can drink, brawl, steal HMMWVs, corrupt women and sing dirty songs while wearing cammies, oversized knives, Seiko watches and really screwed-up 8-point covers that don’t look like the Army’s.

Ronald Reagan, former President of the United States:
“Some people live an entire lifetime and wonder if they’ve ever made a difference in the world. Marines don’t have that problem.”

General Douglas MacArthur, US Army:
“. . these Marines have the swagger, confidence and hardness that must have been in Stonewall Jackson’s Army of the Shenandoah. They remind me of the Coldstream Guards at Dunkirk.”

Admiral Chester Nimitz, US Navy, on the Marine Corps’ battle for Iwo Jima:
“Uncommon valor was a common virtue”

General Douglas MacArthur, US Army:
“I have just returned from visiting the Marines at the front. There is not a finer fighting organization in the world!”

LtCol T R Fehrenbach, USA, in “This Kind of War”:
“The man who will go where his colors go without asking, who will fight a phantom foe in a jungle or a mountain range, and who will suffer and die in the midst of incredible hardship, without complaint, is still what he has always been, from Imperial Rome to sceptered Britain to democratic America. He is the stuff of which legends are made. His pride is his colors and his regiment, his training hard and thorough and coldly realistic, to fit him for what he must face, and his obedience is to his orders. As a legionnaire, he held the gates of civilization for the classical world .. today he is called United States Marine.”

An Anonymous Canadian Citizen:
“Marines are about the most peculiar breed of human beings I have ever witnessed. They treat their service as if it was some kind of cult, plastering their emblem on almost everything they own, making themselves up to look like insane fanatics with haircuts so short as to be ungentlemanly, worshipping their Commandant as if he was a god, and making weird animal noises like a band of savages. They’ll fight like rabid dogs at the drop of a hat just for the sake of a little action and are the cockiest SOBs I’ve ever known. Most have the foulest mouths and drink well beyond man’s normal limits, but their high spirits and sense of brotherhood set them apart and, generally speaking, of the United States Marines with whom I’ve come in contact, are the most professional warriors and the finest men I’ve had the pleasure to meet. ”

General John J “Black Jack” Pershing, US Army:
“The deadliest weapon in the world is a Marine and his rifle! ”

General Mark Clark, US Army:
“The more Marines I have around the better I like it! ”

General Johnson, US Army:
“I can never again see a United States Marine without experiencing a feeling of reverence. ”

Richard Harding Davis, war correspondent (1985):
“The Marines have landed, and the situation is well in hand.”

A Marine Drill Instructor at Parris Island:
“Did you come here just to spoil my beloved Corps, maggot?”

A boot camp weapons coach:
“To a Marine, happiness is a belt-fed weapon.”

LtCol Oliver North, USMC (ret):
“The only people I like beside my wife and kids are Marines.”

MajGen J N Mattis, CG, 1st MarDiv – Iraq, March 2003:
“You are part of the world’s most feared and trusted fighting force. Engage your brain before you engage your weapon. Share your courage with each other as we enter the uncertain terrain north of our Line of Departure. Keep faith in your comrades on your left and right and Marine Air overhead. Fight with a happy heart and a strong spirit. For the mission’s sake, our country’s sake and the sake of the men who carried the Division’s colors in past battles — who fought for life and never lost their nerve — carry out your mission and keep your honor clean. Demonstrate to the world there is ‘No Better Friend, No Worse Enemy’ than a United States Marine.”

Eleanor Roosevelt – 1945:
“The Marines I have seen around the world have the cleanest bodies, the filthiest minds, the highest morale, and the lowest morals of any group I have ever seen. Thank God for the United States Marine Corps.”

An Anonymous US Marine:
“I recently attended a Kansas City Chiefs football game at Arrowhead Stadium. It was their annual Veteran’s Day tribute so members of all the services were asked to participate in the festivities.

A color guard for the National Anthem was provided by the Buffalo Soldiers Association. They looked very sharp in their 1800s-era US Army Cavalry uniforms. Following that, the Navy parachute team put on an impressive display that brought cheers from the 78,000 football fans in attendance. Shortly thereafter, we were treated to the truly awesome sight of an Air Force B-2 Spirit stealth bomber flyover as well as a few other aircraft. All of these sights — but especially the B-2 — were truly appreciated by the crowd who let it be known by their cheers.

I expected that was all we would see of the US Military that day. I thought we would see a high school or college marching band during half-time. Few watch those shows anyway because they have to go to the head or grab another beer during the intermission.

Shortly before half-time, however, I looked down on the sidelines near the end zone and saw the Marine Corps’ Silent Drill Team forming up. As the half-time show started, the players left the field and the announcer came on the public address system to advise us of the Drill Team’s performance. Many of us Marines have seen these performances in the past and they’re always awe-inspiring. I didn’t expect that the large civilian crowd of football fans would be as appreciative of the Drill Team as they had been of the high-tech B-2 or the daring of the Navy parachute team. However, I was on the edge of my seat. As the Drill Team marched onto the field, the crowd grew noticeably quieter. Soon, the team was fully into their demonstration. The stadium was absolutely silent.

From high in the stands’ upper reaches where my seats were, I was able to hear the “snap” and “pop” of hands striking rifles. Both big screen “Jumbotron” scoreboards displayed close ups of the Marines as they went through their routine. As they completed their demonstration and lined up for the inspection, the crowd began cheering as the Marines twirled their rifles in impossible fashion. Then came the inspection. Again, the crowd fell silent and watched intently as rifles were thrown, caught, twirled, inspected and thrown some more. Each well-practiced feat brought a “wow” or “did you see that?” from those sitting around me.

I sat there in silent pride as I watched my brother Marines exit the field. A young girl behind me asked her mother a question about how the Marines learn to do the things they just did. The mother replied, “They practice long and hard and they’re Marines; they’re the best.” 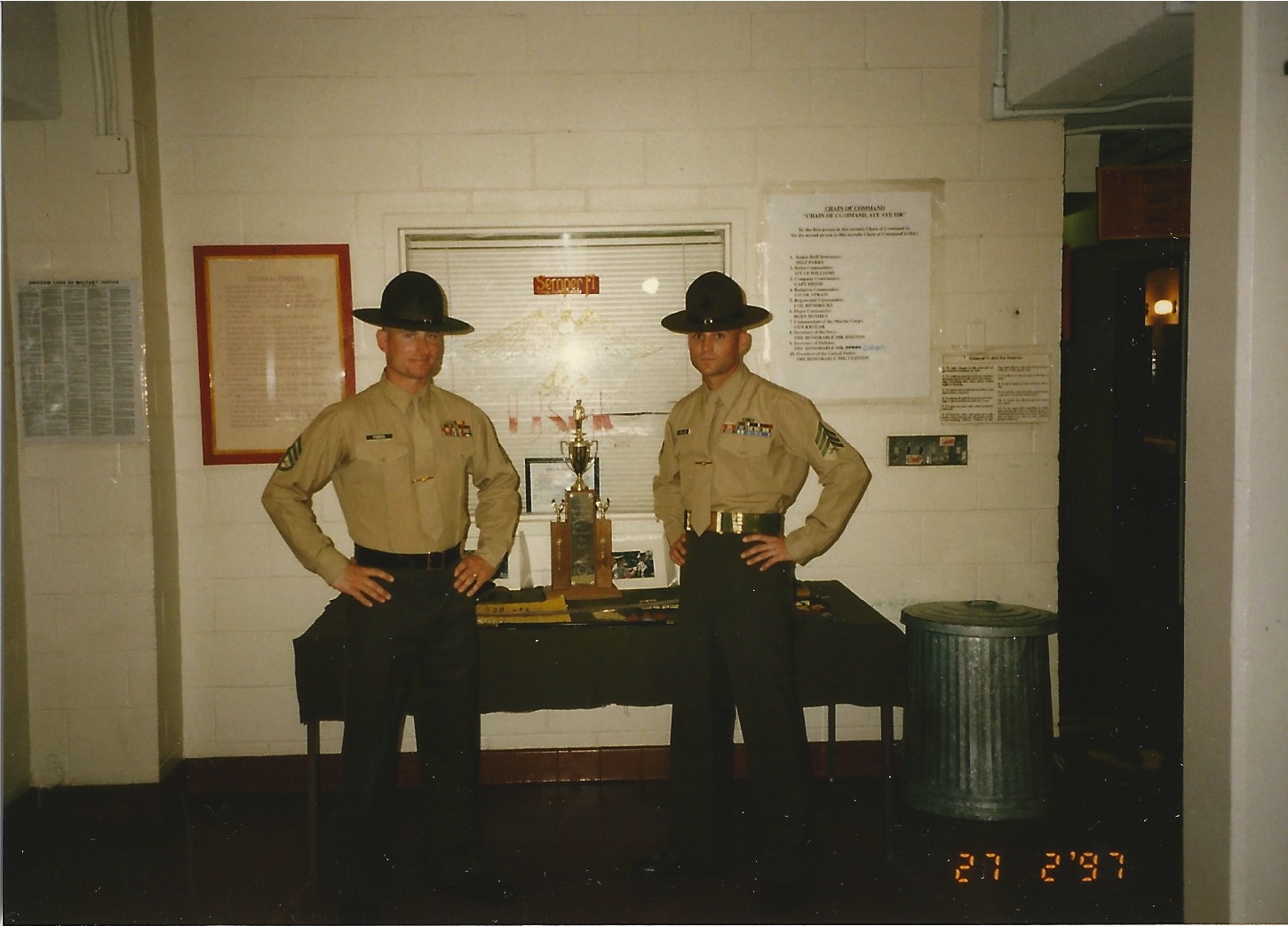