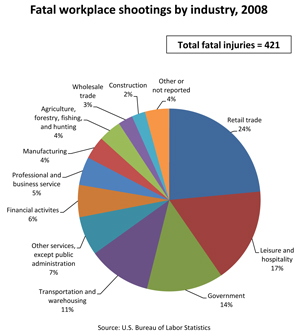 As a requirement dictated by Occupational Safety and Health Act (OSHA) requirements and Civil law, the growing number of companies purporting to provide security and risk management training is increasing with each violent workplace incident. The solution to selecting a qualified company for this delicate task is expertise in the field and qualified individuals with sterling reputations. CGPGMG, LLC consults in the area of work place defense strategies and training for safety to mitigate the risk and reduce liability. Topics include critical incident response of employees to focus on survival and not engaging violent offenders. Workplace violence awareness, corporate security, investigations, and risk management. CGPGMG, LLC prides itself on their expertise in civilian based response to active shooters mitigating risk unmet by other training providers.

CGPGMG, LLC maintains that the majority of the following incidents and the resulting statistics are completely preventable. Not only are they often preventable, employers have a legal obligation to protect employees from workplace violence. According to the FBI report entitled “Workplace Violence-Issues in Response”, “Businesses are under a variety of legal obligations to safeguard their employees’ well-being and security.” These obligations stem from (OSHA) requirements as well as Civil Rights law requirements. The following statistical data clearly demonstrates that violence can happen anywhere at any time.

The following Failure Event Statistics have been compiled from a number of notable sources illustrating the demand for this unique training unmet in today’s marketplace.

Violent Incidents in the Corporate Environment

According to the FBI report “Workplace Violence-Issues in Response,” “In general, the violent acts occur as workers are performing their normal tasks.”
Recent Incidents:
• Orlando, Florida -November 2009 – A suspect was arraigned on first-degree murder charges in the killing of one and the wounding of five others at a business where he once worked.  - Former Employee
• Albuquerque, New Mexico-July 2010 – Three were killed (including the shooter) and four others were wounded by a man who was angry over a custody dispute.  - Domestic Dispute
• St. Louis, Missouri-January 2010 – Four killed, 5 wounded -manufacturing plant  - Current Employee
• Kennesaw, Georgia-January 2010 – Two killed, two injured-truck rental office  - Former Employee
• Grand Rapids, Michigan-January 2011 – A woman destroys a towing office and assaults employees over a bill she received. Cost in damage was several thousand dollars.  - Disgruntled Client