A US Marine to Deliver News Gets Delayed READ THIS 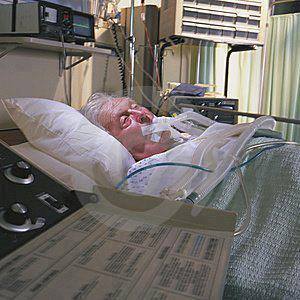 A US Marine to Deliver News Gets Delayed READ THIS

A US Marine to Deliver News Gets Delayed READ THIS A nurse took the tired, anxious serviceman to the bedside. “Your son is here,” she said to the old man. She had to repeat the words several times before the patient’s eyes opened.

Heavily sedated because of the pain of his heart attack, he dimly saw the young uniformed Marine standing outside the oxygen tent. He reached out his hand. The Marine wrapped his toughened fingers around the old man’s limp ones, squeezing a message of love and encouragement.

The nurse brought a chair so that the Marine could sit beside the bed. All through the night the young Marine sat there in the poorly lighted ward, holding the old man’s hand and offering him words of love and strength. Occasionally, the nurse suggested that the Marine move away and rest awhile. He refused.

Whenever the nurse came into the ward, the Marine was oblivious of her and of the night noises of the hospital – the clanking of the oxygen tank, the laughter of the night staff members exchanging greetings, the cries and moans of the other patients. Now and then she heard him say a few gentle words. The dying man said nothing, only held tightly to his son all through the night.

Along towards dawn, the old man died. The Marine released the now lifeless hand he had been holding and went to tell the nurse. While she did what she had to do, he waited.

Finally, she returned. She started to offer words of sympathy, but the Marine interrupted her, “Who was that man?” he asked.

The nurse was startled, “He was your father,” she answered.

“Then why didn’t you say something when I took you to him?”

“I knew right away there had been a mistake, but I also knew he needed his son, and his son just wasn’t here. When I realized that he was too sick to tell whether or not I was his son, knowing how much he needed me, I stayed. I came here tonight to find a Mr. William Grey. His Son was killed in Iraq today, and I was sent to inform him. What was this Gentleman’s Name? “

The nurse with tears in her eyes answered, “Mr. William Grey………”

The next time someone needs you … just be there. Stay.

SEAL OF HONOR; thank you for allowing me to re-post this to show the nation what our service members do for the extra mile of road the public rarely sees.  As a former drill instructor for the Marine Corps and retired police officer turned “Active Shooter Prevention Expert” for the public safety patron spectrum, I am floored by this story.

YOUR ARE THE EPITOME OF A TRUE PATRIOT, THANK YOU,

Active Shooter Prevention Trainer and Public Speaker PROFESSIONAL SUMMARY: Chris Grollnek is a dynamic Public Speaker and forward-thinking Director of the Active Shooter Prevention Project, LLC. (www.aspppro.com) An Interview and Investigation specialist with a record of success at the Executive and National level for Leadership and Management efficiencies regarding Policy and the Curriculum Development for Terrorism related Prevention. Chris recently wrote and appeared in the Department of Justice Active Shooter prevention Training Video (2022-2023). Complete understanding of government and corporate contracting and investigative programs to enhance corporate standards of policy implementation. An architect of efficiencies with a results-oriented pattern of success in investigative techniques, security, safety, sales leadership, and interviewing while leading teams and establishing best practices. A well-versed public speaker, freelance television contributor, and radio news commentator. Experience in testifying before serval governmental bodies, including The United States Congressional bodies of the House and Senate committees, regarding Terrorism Prevention, Response, and Training Initiatives. #activeshooterexpert #NEVERHERE
View all posts by Chris Grollnek →
This entry was posted in Chris Grollnek Blog and tagged A Marine to Deliver News Gets Delayed READ THIS, Chris Grollnek Facebook, Chris Grollnek thanks Seal of Honor, Marine Corps, Seal of Honor on Facebook, United States Marine Corps, US Marines, USMC. Bookmark the permalink.