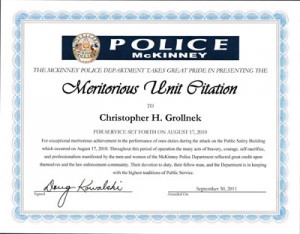 On 8-17-10 at approximately 0900 Officers X, X, X, X, X, X, and Grollnek were at the McKinney Police Departments outdoor range conducting a shotgun training course.  Corporal X announced that there was an incident at the PD that was unfolding with a vehicle on fire and shots being fired.  Cpl X and Cpl Grollnek advised all the parties of the incident unfolding and immediately began responding to the PD with Officers X and X.  Upon arrival to the PD Cpl X, Ofc X, X, and X began holding perimeters’ until K9 Ofc X arrived and then immediately began searching for who everyone assumed would be a second active shooter.  Cpl Grollnek arrived at the PD to begin a perimeter until asked to bring the T-Rex to remove possible pinned down victims.  As the T-Rex  was being mved conduct the request, Cpl Grollnek was advised that Swat would need to be ready for an alternate assignment.

At that time, the Team was advised that they were responding to the suspect’s residence in Ana, TX to conduct an exigent circumstance search of the residence.  Once on scene, Cpl Grollnek set up on perimeter with Cpl X and waited for any additional suspects to come outside of the residence as the Swat Team Leader attempted to call out anyone that may be inside.  After no one responded to the announcements on the loud speaker, Cpl Grollnek made his way to the front door and made entry as the point man to the residence as the front door was unlocked.  K-9 Kilo was called up and began a preliminary search.  After the K-9 was brought back outside with negative results, Cpl Grollnek began clearing the residence.  After the all clear and secondary search was complete, Cpl X and Cpl Grollnek went to the perimeter again and search the outbuilding.

Once the search was completed the scene was turned over to C.I.D. to obtain a warrant and the Team responded back to the PD on stand-bye for the remainder of the day.