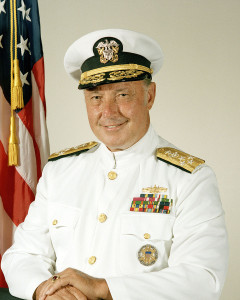 Retired 4-Star U.S. Navy Admiral James A. “Ace” Lyons was recently at the National Press Club. And his claims are shocking.

It appears that the Obama Regime has been FULLY infiltrated by the Muslim Brotherhood terrorism front group on every level. And that pro-radical Islam group is also in every level of U.S. security agencies. Lyons went on to say that “the transformation of America has been in full swing ever since 2008.” And when Obama campaigned on a platform to “fundamentally transform America,” Obama has done exactly that!

In addition Lyons made the important point that there is no meaningful line between Islam and radical Islam. “Islam is Islam,” he said.

Speaking about Obama’s refusal to attend the recent march in France, reportedly attended by more than 50 world leaders to condemn Islamic terrorism following the gruesome murders of cartoonists who had the audacity to lampoon Islam, Admiral Lyons said that act was a “signal to Islamic Jihadis,” and is “one of many signals he sent over the years while in office.”

“There’s no question we got a hell of a job ahead of us,” Admiral Lyons said. “With the Muslim Brotherhood penetration in every one of our national security agencies, including all our intelligence agencies,” he proclaimed.

Admiral Lyons said that our “lead intelligence agency” is “headed by a Muslim convert,” a reference to Obama CIA head John Brennan.

The new GOP majority in both houses of Congress were elected to “stop the transformation of America, not to see how they could work with the president.”

There has never been a more important time to support the military, as it’s clear that they have a Commander-in-Chief who doesn’t have their best interests in mind. Please share this important message from Admiral Lyons!

During a private brief in Washington, Admiral Ace Lyons discusses what happens when the hands of mercer are tied against the actual threats this country faces. If you disagree, watch the video from someone who everyone in the room fell silent to when he was speaking until toward the end when they were forced to shut him down.